﻿RAEBURN MESSIAH, THE MESSIAH OF METAL﻿

It all began in the basement of Raeburn’s house in Brockton, Massachusetts. But it almost didn’t happen at all! The only son of a very young, single mother, Katherine, Raeburn was a shy student in high school. He spent much of his time in the art wing of Brockton High School painting, sculpting, and designing jewelry. Art came naturally to Raeburn and he excelled there. He did well in English class, though he hated math. By his junior year Raeburn was writing songs and poetry, though the poetry was more akin to free-form thoughts. Twenty years later, Henry Rollins would credit Raeburn as one of his main influences as a writer because Raeburn, “didn’t seem to give a fuck about his writing. His style was sloppy, but man, so elegant. There's Bukowski and then there's Raeburn Messiah.”  It was easy to get lost in the crowd at Brockton High School - it’s the largest school east of the Mississippi! And Raeburn was quite happy to coast on through, taking art classes, skipping math classes, and writing poetry in the auditorium. By 1980, Raeburn discovered bands such as Husker Du, The Adolescents, Minor Threat, and The Clash, whose music and lyrics resonated deeply inside of him. The more he discovered the music, the heavier he wanted it - so he sought out other, harder music. Raeburn found a demo record by The Misfits and his entire life changed. He taught himself how to play the drums and the bass guitar. The year was 1984.

Every summer, the city of Brockton held a Fourth of July festival with rides and food, and anybody that wanted to be seen went to the festival. By this time, Raeburn was an expert in many genres of music - including ska, a form of reggae music. Some of Raeburn’s early ska influences included old Slade, The Specials, The English Beat, The Selectors, and Fishbone (with whom Raeburn still works occasionally). Raeburn had gone to the festival with his mother, but he ditched her after she paid his admission. Raeburn wandered around until he heard music. Live music. So, he followed the sound. In one section of the large field - far from the rides and food -  a small stage was set up and a band was about to take the stage. The band was from Norwood and they had a sloppily spray-painted sheet strung up behind them with the words, “The Ducking Forks.”

Raeburn stood behind the small crowd of about fifty people. The bass player was warming up and he was thumping out a familiar ska beat, and Raeburn was intrigued because there wasn’t much of a metal ska scene around Boston at that point. Besides the bass and guitar player, the band had a trombone and trumpet player. But the guitar player was freaking out, apparently, because the singer hadn’t shown up yet. Just then, he announced into the microphone that he was sorry, but they had to cancel the show because they didn’t have a singer and then the band started packing up their instruments. Raeburn, for whatever reason, walked through the crowd and onto the stage and asked the guitar player what songs they were going to perform. The guitar player looked Raeburn up and down (Raeburn was still wearing his Doc Martens and so was the guitar player) and gave him a set list of eight songs that included, “A Message To You, Rudy," and, "Party at Ground Zero.” Raeburn scanned the songs and said, “I know all of these.” The guitar player smiled and asked Raeburn if he could sing. Raeburn said, “I guess,” and this was the beginning of Aluminum Jesus.

Raeburn, who hadn't really ever spoken to anybody before, morphed into a new person that night - the Messiah of Metal Ska! And the crowd loved them! Around halfway through their set, a kid stood in the back of the crowd. He didn’t look happy - it was the singer. Later, that singer would go on to begin his own band named The Mighty Mighty Bosstones. That singer was Dicky Barrett and that’s how the rivalry between Aluminum Jesus and TMMB began! And after the show, a dark-haired sophomore named Bunny introduced herself to Raeburn. They were immediately drawn to each other and started dating.

﻿Shortly after graduating from high school, Raeburn and Thumper, the bass player for The Ducking Forks, moved into a small, two-bedroom, fifth-floor apartment on Symphony Road in Boston. It was the apartment of Thumper’s older brother, a student at Boston University. Raeburn slept on the couch and got a part-time job at Newbury Comics on Newbury Street. He and Thumper put ads up for other musicians because the other members of The Ducking Forks either stayed in Norwood or went to college elsewhere. Their trombone player joined the Army and was never heard from again. Bunny, who was still in high school, stayed with Raeburn every weekend and helped develop business plans and book gigs. Bunny was Raeburn's first manager.

One day while walking through Kenmore Square, Raeburn met Mr. Butch, a legendary homeless musician. Mr. Butch offered this sage wisdom to Raeburn:﻿
Raeburn and Mr. Butch remained close until Mr. Butch died in 2007, while driving a scooter given to him by Raeburn. Mr. Butch is the man credited with coming up with the name, Aluminum Jesus, though it wasn’t meant to be the band's name. One evening, at just about sunset, Mr. Butch was standing on Beacon Street, just outside of Pizzeria Uno. He had just finished performing for several hours and was putting his trademark Fender Strat into its case when four white, douche-baggy, high-school dicks from Allston started to torment Mr. Butch just for shits and giggles. Now, Mr. Butch had a propensity for booze and many of his fans “paid” him in liquor. And on this fine day in the early fall of 1985, Mr. Butch was pretty hammered. Raeburn and the other band members, still using the name The Ducking Forks, were walking from a music store on Mass Avenue to their first gig at The Rat, which was in Kenmore Square. Raeburn had let his hair grow extra-long, though he can’t recall why, and was the first to round the corner. As Raeburn rounded the corner, one of the Allston dicks was about to smash Mr. Butch in the face. The other three dicks were going though Mr. Butch's stuff. Raeburn threw his hands up in the air and yelled, “fuck off!” The sun was at Raeburn’s back, he wore large, hoop earrings, his hair was extra big, and an aura formed around it, making him appear an ominous ten-feet tall. The four Allston dicks ran away screaming like little girls. Mr. Butch, not knowing the savior was his friend Raeburn, squinted and said, “thank you, my aluminum Jesus, thank you.” By the time Raeburn and the band got to their Rat gig, the band was renamed Aluminum Jesus. At that point, the band consisted of BARNEY GOTH on guitar (he was the original guitar player for Until Thursday, the band that would by this time be ‘Til Tuesday), drummer DON VINNIE (who was an art-school dropout), bassist THUMPER, trombone player FLUFF, trumpet player MIKETY-MIKE, and CHOO-CHOO on keyboards.

But soon, Aluminum Jesus would abandon the metal ska sound in favor of an even harder sound... 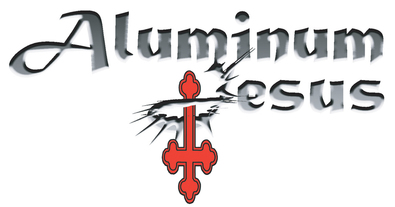 The Aluminum Jesus logo has remained unchanged for over twenty years!